Too tired to cook? Too busy? Just don’t feel like it? I get it. Most of us need a break from cooking every once in a while. But if once in a while has turned into several nights a week, and you’re stopping at McDonald’s, ordering a pizza, or picking up Vietnamese instead, it’s going to start taking a toll on your health, if it hasn’t already.

The good news is, there’s a middle ground between Subway and gourmet from scratch! Hit the grocery store instead of Boston Pizza. You can restock fresh fruit and veggies while you’re there, and put some real food on the table in about ten minutes or less. Your heart and wallet will thank you.

If you’re seriously not up for cooking. At all.

Grocery stores are happy to meet this need. Some have gotten quite creative with their offerings, but you should at least be able to find these just about everywhere:

Compare to fast food: A 3 oz serving of rotisserie chicken has about 300mg of sodium, the bagged salad might add another 300mg, depending on the ingredients, and this rice has next to none. A similar salad at Subway will be about 1100mg of sodium. And this way, you can use the leftover chicken for lunches all week.

If you’re up for spending 10 minutes in the kitchen.

Now you’ve got some serious options. I’ve included some ideas to get you your half-plate of veggies, but of course, you can substitute with your favourites. And if you pick up some pre-washed greens, you can easily make a side salad. (Try this Easy Arugula Salad.)

Compare to fast food: You won’t get real whole-grain bread in any restaurant that I know of, except Good Earth. The best the others usually do is 50%.

Note: I have no relationship with the manufacturers of these foods. I just think you might find it helpful.

Compare to fast food: Again, pretty rare to see any kind of legume/pulse at a fast food restaurant, but Tim Horton’s chill, for comparison, is 1180mg of sodium per cup. 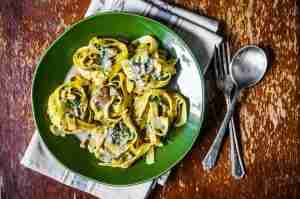 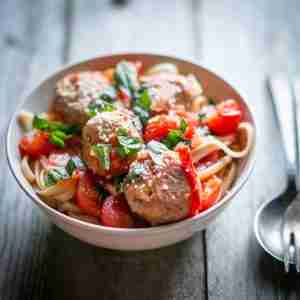 and you’ve balanced a smaller portion of pasta with protein and veggies. Now you’re in business. About 1/2-1 cup of the pasta itself is plenty. Fill the rest of the bowl with the other stuff. And for all of you watching your blood sugar, if you cook it until just al dente, pasta actually has a low glycemic index. While you can make your own sauce, a can of no-salt-added tomatoes is decent substitute in a pinch, and much lower in sodium than store-bought pasta sauce. Bonus points if you want to sprinkle in some basil, oregano, garlic, or parmesan cheese (the real stuff, please). Stir in some baby kale at the end to top off your veggie quota for that meal.

Most of these use ingredients may be in your kitchen already. If not, stock up on your next grocery run, so the next time you’re not up for cooking, you’ll got some easy options that hit the sweet spot.

One final tip about rice, quinoa, and other grains. While you can buy at least brown rice pre-cooked, it’s much less expensive to cook your own. Quinoa and bulgur take only 15-20 minutes to prepare. Wheat berries (and brown rice) take longer, but they all freeze nicely. So next time you cook some, make double and put the extras into single-serving containers. Then you’ll have some ready whenever you need it.

Happy (not) cooking! Do you have a no-time-to-cook favourite? Join the conversation on Facebook.

This week on the blog. 3 Registered Nurse friends