(Photo by Jez Timms on Unsplash)

If you’ve heard the nutrition news this week, I’m guessing you are at least rolling your eyes. This tweet captured my feelings perfectly:

Nutrition is in the news today so make sure to buy your local dietitian a drink. #RDchat #MedEd

If you haven’t heard, this headline pretty much captures it all: 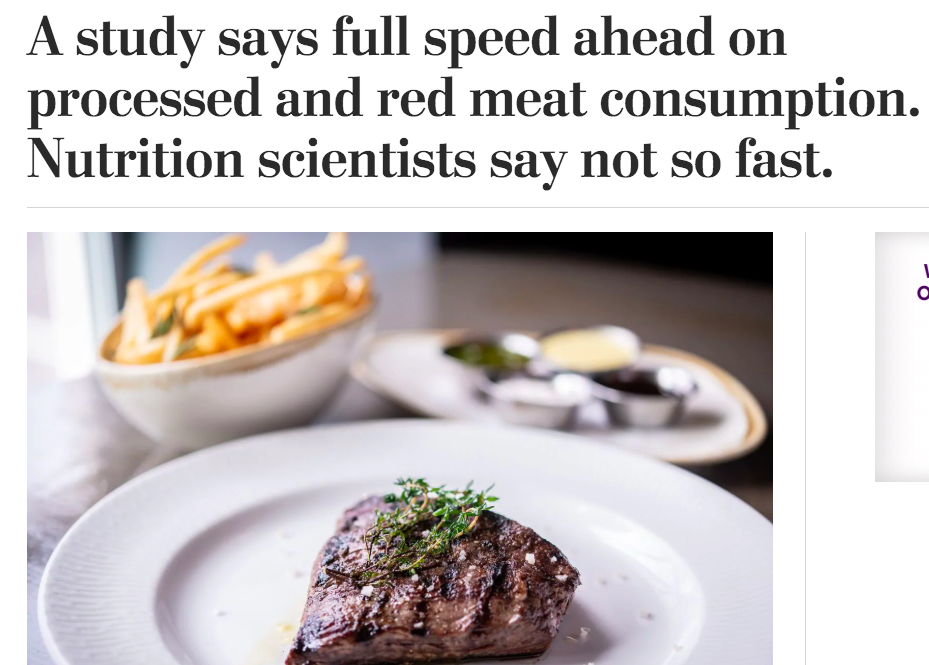 As with all things nutrition related, my advice remains to read past the headlines. The explanation here is that nutrition science is imperfect and imprecise. It’s hard to study, especially with cardiovascular disease and cancer because (1) they take many years to develop (2) few high quality studies last that long and (3) the more prevalent observational studies that ask people about their eating habits and then check in on their health years later are problematic and can’t prove that one aspect of eating caused the observed outcomes.

Why not? People don’t always answer questionnaires accurately and may change their habits as they get older. Confounding factors may influence the results, despite researchers’ best efforts to adjust for them. People who eat lots of red meat may also drive too fast or skip their yearly physical.

The dietitian who was recently hired into my old job at Calgary’s cardiac rehab program reached out to me nearly a month ago with this very question: “What are you telling people about red meat?” It took me a few days to respond because I wanted to dig up my notes and make sure I was up to date.

As with many foods, there are pros and cons. Red meat is protein-rich and provides other essential nutrients like iron, vitamin B12, zinc and more. There are worse things you could eat. For this to be meaningful to an individual, we have to ask, “Compared to what?” A steak and potatoes dinner beats a box of macaroni and cheese. It’s all relative.

However, even the authors of this recent controversial paper found a statistical benefit in limiting red and processed meat, but their stance was (1) it’s small and (2) the evidence is weak. True, the evidence for red meat and health outcomes isn’t crystal clear. On this there is agreement. (Processed meat is more conclusively culpable, but the amount of risk is small, depending on how much you eat.)

It’s like a nutritional Rorschach test. Others have examined the same data and conclude that anything to possibly lower your risk is worth doing and can save lives, when considered at a population level.

My answer to my successor? “I think a cautionary statement is appropriate,” I wrote, following the lead of the most recent American Heart Association guidelines, which say:

I offered this excerpt from my ebook, The Sweet Spot Guide to Eating Well After a Cardiac Event:

What about regular red meat? Can I have a steak once in a while? Regular, unprocessed red meat is another area where the evidence is conflicting. The DASH and Mediterranean dietary patterns are both low in it, and it’s linked to a higher incidence of diabetes. Even the leaner cuts are higher in saturated fat than most poultry (see saturated fat sidebar).

However, evidence conclusively linking red meat to heart disease is limited, and it’s a good source of nutrients like zinc and iron.

As with eggs, include it if you like it, but aim for no more than 2-3 servings per week of mostly lean red meat. (Note: A serving is about 3oz/90g of cooked meat – about the size of a deck of cards.) That will leave room for you to experiment with the many protein foods that have been linked to improved heart health, like fish, beans and tofu.

* Note: I based that 2-3 servings per week guideline on a detailed review article written by Harvard researcher Dariush Mozaffarian. Other guidelines aren’t that prescriptive. Interestingly, I didn’t realize I was referencing the author manuscript. When his paper was published by American Heart Association in their journal Circulation, the guidance was changed to 1-2 servings per week. Until and if we get better research, I’d aim somewhere in there if you want to eat red meat but also be conservative about cardiovascular health.

In my cookbook* I didn’t address this in detail, but listed lean beef, pork, and lamb cuts as “Supporting Cast,” versus “Stars” like fish and legumes. Sausages, bacon, lunch meat, and other processed meats were categorized as “Cameos (Small but enjoyable appearances, if you’re a fan).” Ribs, ribeye, and other fatty beef, pork, and lamb cuts landed in the “Cameos” group too. 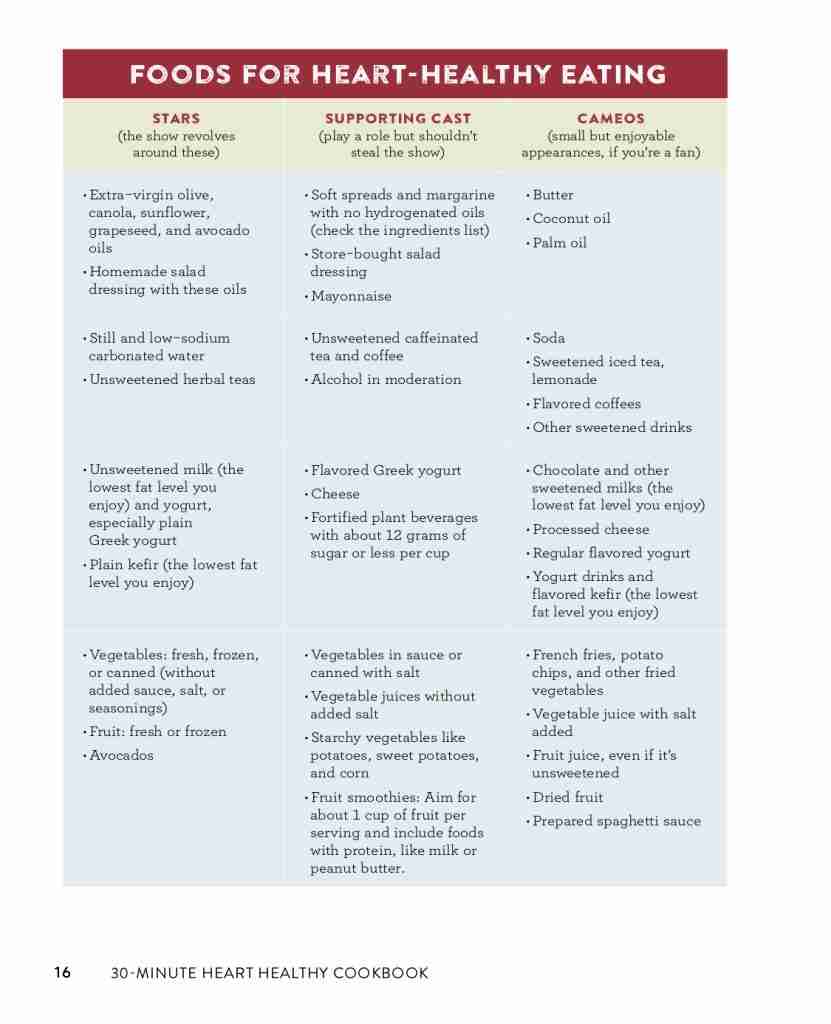 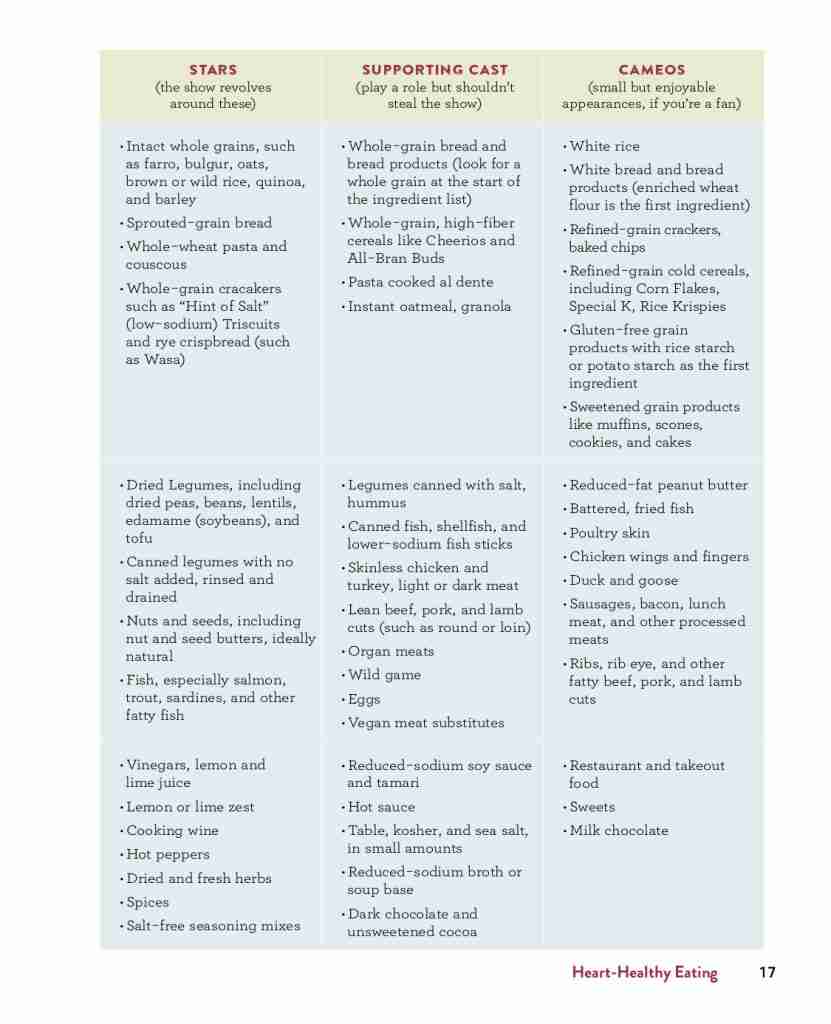 I know that much of this relies on observational studies. We just don’t have long-term studies where people are randomly asked to eat more or less red meat, and we likely never will. But when you look at other pieces of the puzzle, like animal, laboratory, and other human studies, a prudent approach with red and processed meat makes sense.

This lack of certainty is frustrating, I know. What I tell clients in these areas where the science isn’t clear, as in this previous post about alcohol and coconut oil controversies, is to go with moderation, factoring in your personal preferences and tolerance for risk.

Whatever way you decide to go on red meat, remember that it’s just one component of your overall dietary pattern, and food is just one aspect of your overall lifestyle. A person who wolfs down a Big Mac and fries while driving between their two minimum wage jobs will undoubtedly be more likely to develop heart problems down the line versus one who enjoys a perfectly grilled beef tenderloin with a salad on the deck with friends.

Socioeconomic factors, other health behaviours, and the rest of your menu all make a bigger difference to your health than beef or chicken. On this we can all agree.

Where do you land on this? Comments? Questions? Always happy to hear from you on Facebook or via email.

p.s. If you want to read more on this topic, here are a few comprehensive articles:

Get my free e-book, The Sweet Spot Guide to Eating Well After a Cardiac Event.