Health Canada released a report yesterday, “Sodium Intake of Canadians in 2017.” Three guesses as to how well we’re doing. No surprise, it’s not pretty.

And, uh, 19-30 year-old men? We need to talk. 96% of you are over the recommended sodium intake levels! (Compared to 58% of Canadians overall.) Ease up on the pepperoni pizzas will you? Actually, I’m just kidding. It’s largely not your fault guys. Our food is loaded with sodium and your younger, generally more muscular bodies need more to eat.

Truly, from a public health perspective, the solution to this is lowering the sodium in the food supply, but you don’t have to wait until that happens. And you don’t have to eat like a saint! A few strategic swaps save you a lot of bang-for-your-buck, sodium-wise.

But first, a few sodium FAQ’s:

What’s the difference between salt and sodium?

How do I know if I get too much?

Can you get too little sodium?

Are you kidding? I’m not going to calculate this every day!

All that being said, most of us get too much sodium (58%, according to the 2017 report). These 7 easy swaps can help you reduce sodium and still enjoy summer:

Want to see these 7 swaps in action over a typical summer weekend? See the before and after sodium makeover below. I purposely left in some not-so-low-sodium foods, just to show you that you don’t have to be perfect! Really, if you cut back on the big ones: Bread and bread products, processed and restaurant food, there’s room for a bit of cheese, salt, or even the occasional chocolate chip cookie.

Note: The numbers on the left refer to the swaps above, and the italicized menu items are the sodium-reducing swaps. 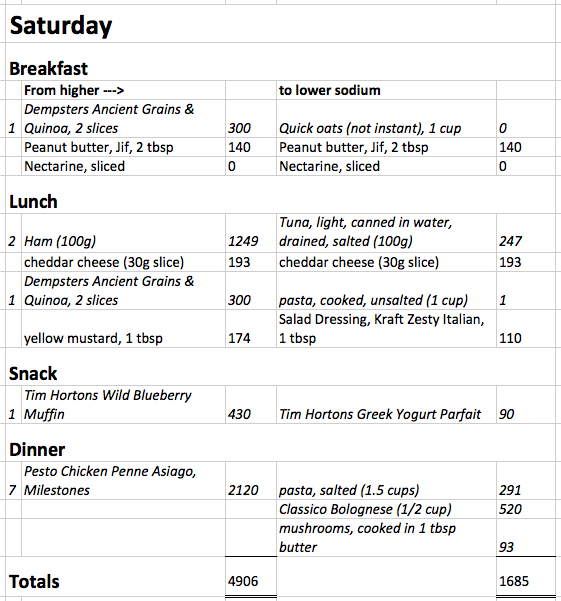 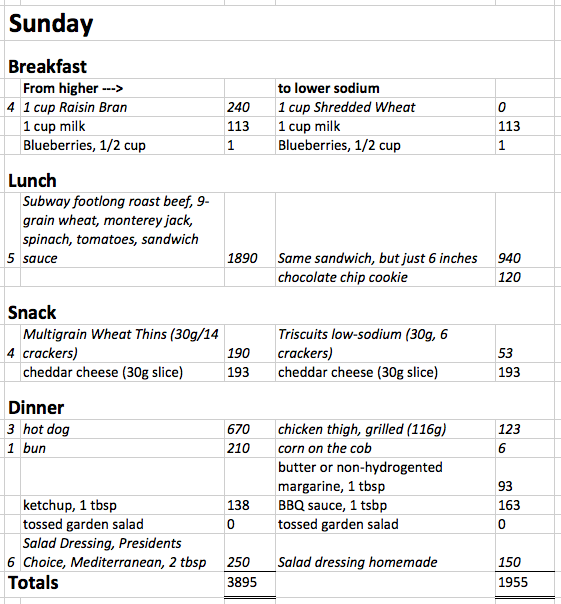 Isn’t that neat? The differences from just a few key swaps are huge. You could go lower on the right for sure, but I wanted to show you that you don’t necessarily have to. You deserve to eat in a way that satisfies you too, so keep what you love and swap out the rest. You just might find you enjoy it more!

What are your favourite sodium-reducing swaps? Join the conversation on Facebook.