Did you ever notice that people think about salt, sugar, and other demonized foods in all or nothing terms? They’re either good or bad, in or out. So one of the most common questions I get when speaking about blood pressure is, “How can I make food taste good, now that I can’t use salt?”

The good, albeit slightly more complicated news is that the impact of foods on health depends on the amount. A sprinkle of salt on a homemade meal is fine. Make a habit of ordering takeout and you’re more likely to develop high blood pressure.

If used strategically, alongside other flavourful ingredients, a little salt can go a long way. Same for other sodium-rich ingredients typically found on “do not use” lists. Let’s see if we can move away from this all or nothing paradigm, shall we?

So what counts as “low-sodium”?

If you read my “Summer Salt Swaps” post, you might recall that sodium recommendations range from 1500mg to 2300mg per day. Hypertension Canada suggests aiming for 2000mg or less, for both prevention and management of high blood pressure, so I usually go with that.

I like use 500mg per meal as a rule of thumb, assuming you eat three times a day, which leaves room for snacks. If one meal is higher, say if you eat out, then you can aim lower for the rest of the day.

500mg per meal is in line with Canada’s food labeling regulations. Pre-packaged meals can boast of being “low-sodium” if they have less than 140 mg sodium for every 100g of food. A decent-sized frozen meal is about 350g. Do the math, and you’ll find that as long as it’s lower than 490mg of sodium, it can say “low-sodium” on the package. Of course most frozen meals are higher than that, but in our kitchens… we can do this.

Start with your favourite of these no- or very-low-sodium options. If you’re not an improviser, look for them in recipes. 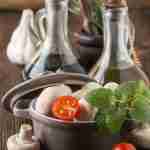 If that doesn’t quite give you enough flavour, try pulling one of these tricks out of your hat.

Quick disclaimer before we get to this list. These will only give you a low-sodium meal if the rest of the food isn’t hiding any sodium.

Fresh/frozen salmon, broccoli, and pasta yes. Sausage on a bun with ketchup, not so much.

That sausage meal would be around 1000mg of sodium. No salt needed. But the fish? About 50-100mg. (Most food naturally contains small amounts.) So think about adding no more than ~400mg.

So before you do this with abandon, check your other ingredients: Spaghetti sauce, bread, store-bought salad dressing… read the label!

And you might want to pull out the measuring spoons to be sure. Here goes…

One in the middle I like is the “Better Than Bouillon” (sold at Costco, and also, not sponsored, just a tip.) 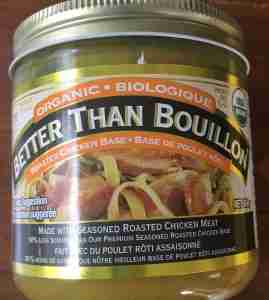 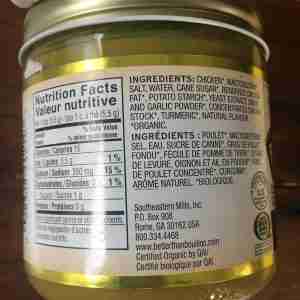 I made chicken noodle soup last night with a tablespoon of it, which adds about 1050mg of sodium. Sounds high, but it made at least 10 cups of soup, so ~100mg sodium each. Canned chicken noodle soup, on the other hand, can be in the neighbourhood of 850mg per cup. And my soup also got flavour from cooked onion, celery, carrots, mushrooms, dry thyme, and white wine. But the chicken stock put it over the top. 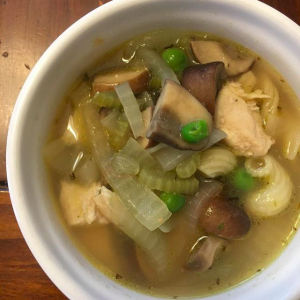 The point is that these sodium-containing flavourful ingredients are fine, even if your blood pressure is a concern, when used in measured amounts on homemade, minimally processed food. The trick is not to go overboard, but you’re much more likely to do that by adding a couple of buns vs. getting too heavy-handed with the salt shaker.

Conventional cardiac nutrition advice usually just says to stay away from them. But we want people to cook more! And that’s not going to happen if the food tastes like cardboard. So if you need a little extra zip, you don’t have to be a sodium saint. No points for the lowest sodium intake. Just keep it reasonable.

cc: Earls Restaurants, purveyors of several 3000-4000mg sodium dishes. You can do this.

Did you find this helpful? I hope so! If so, send it to a friend or family member who is struggling with high blood pressure. Let’s spare them bland low-sodium food too, shall we?

Note – All nutrient amounts are from Canadian Nutrient File unless otherwise noted.

The least expensive nuts and seeds for heart health