As promised, I’ve been experimenting with plant-based meat alternatives. Prior to this we would have the occasional veggie burger or a dish made with veggie ground round, but my previous experiences with veggie hot dogs and sausages left me with a big NO for the rest of it.

I decided that there was no way I could try everything in this category, so I just picked a few and wrote them up. Maybe in a few months I’ll share a few more. If you have others you like or are curious about, let me know!

Aren’t they too processed? I hear you with this concern. However, most appear to have an edge versus processed and red meat, in terms of health – yours and the planet’s.

But there are few studies and lots of variety in this category, so hard to make a blanket statement. Take a peek at the discussion about that in my recent veggie burger blog post.

If you’re looking for less processed ways to bump up the protein in your plant-based meals, I have ten ideas for that here (not all vegan though).

Here’s what we’ve tried so far: 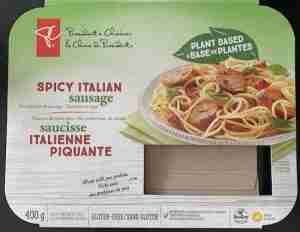 These were surprisingly flavourful! I wouldn’t serve them all on their own, say with potato and a vegetable, but good in mixed dishes.

We used it in a pasta and a Tuscan bean dish shared by a member in my Sweet Spot Kitchen program. Chop them up and add to soup or a rice dish for that spicy, rich flavour you want from sausage.

Are they heart healthy?

As always, the answer depends on what you’re comparing them to. Relative to sausage made with meat, this is a win. As with any of these, you’d certainly be better off healthwise cooking a plant-based protein food from scratch, but if split pea dal isn’t in the cards this week, don’t let “perfect” be the enemy of good. 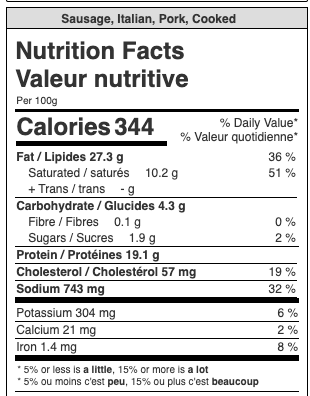 The main ingredients are pea protein and vegetable and coconut oils. There is an eye-poppingly long list of ingredients, but they’re mostly commonplace stuff like dried red bell peppers and a number of vitamins and minerals. It may sound unfamiliar, but there’s nothing I’d be concerned about. You’ll see sugars but it only amounts to one gram per sausage.

Bottom line: If you’re looking for a compromise for meat lovers, including yourself, this will do nicely.

Note: In hindsight I realize I should have tested a more widely available brand, like Beyond or Yves! I bet they’re similarly tasty. If you’ve tried those, chime in with your thoughts over at the Facebook group.

These are popular with vegans, so I wanted to take them for a test drive. Surprisingly, the main ingredient is mung bean protein! How they make that into something so eggy is a food science miracle.

I went for these folded eggs versus the JUST liquid egg product, because another member of my group program said it took a long time to cook and stuck to every pan she tried.

(Edited to add that one reader, Kelli, aka @sxwxgirl1 on Twitter, reached out to say that her daughter “LOVES the liquid ‘just egg.’ Add a tbsp olive oil to pan, and voila no sticking.” Thanks for the tip!) 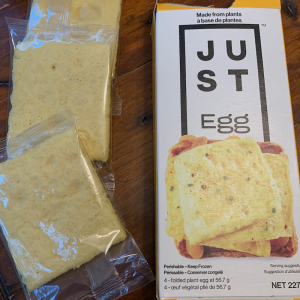 Amazingly, you just pop the folded “egg” into the toaster! I must admit I added a bit of cheese to this breakfast sandwich, so not purely plant-based, but I was afraid to try them without my favourite egg sidekick. 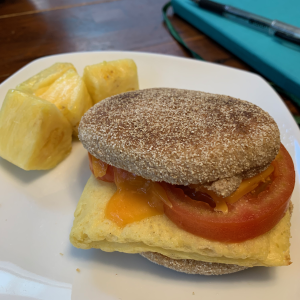 A few days after I tried them I came downstairs surprised to find our 12 year-old girl happily munching on one with a piece of toast. I asked her what she thought. “Fine.” Really? “Sure, why?”

It dawned on me that she didn’t realize it was plant-based! I could barely contain myself. My husband saw what was happening and said, “Don’t do it.”

But I had to tell her… it’s made from beans! It’s not a real egg. Her eyes grew wide. Really? She had no idea!

(I thought it tasted fine too. Pretty much like a little egg you’d cook up for a breakfast sandwich.)

Are they heart healthy?

It’s kind of a toss up. Less saturated fat and no cholesterol, but also 600mg sodium (25% DV) per piece.

(By comparison, the saturated fat in chicken eggs isn’t that high — 3.2 grams for two large eggs versus 1 gram for one of these, which has about the protein of two large eggs. A low-moderate intake of cholesterol doesn’t appear to be problematic for most people. And two large chicken eggs would be about 120mg sodium, so quite a bit less.)

There’s no fibre, which we would hope to see in something plant-based. (Of course chicken eggs have no fibre either.) And it doesn’t appear to have nutrients like vitamins A, B2 (riboflavin), B12, or iron that we find in eggs.

The bottom line? They’re a decent source of protein, which we can all use at breakfast, and convenient! Too bad about the sodium. I think this is more for people who ethically want to avoid eating animals, are allergic to eggs, or just want a quick grab-and-go egg sandwich. 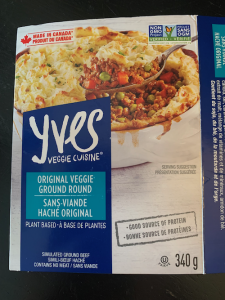 This product has been around for a while, but I get questions about it often, so I wanted to include it. You use it instead of ground beef.

I find it works well in chili or spaghetti sauce – anything where the meat isn’t expected to provide the dominant flavour. But don’t use it to make hamburgers!

What I like about this is that you don’t have to cook it, so it’s a bit quicker to prepare. You just mix it in towards the end of cooking and warm it up. You can also freeze it, in case you don’t use the whole package in one go.

Is it heart healthy?

The main ingredient in this is soy protein, which can help lower cholesterol, if you eat enough of it. (Studies use about 30 grams of the protein a day.)

When compared to ground beef, I’d give it a yes, with just about everything leaning in the heart-healthier direction except the sodium. 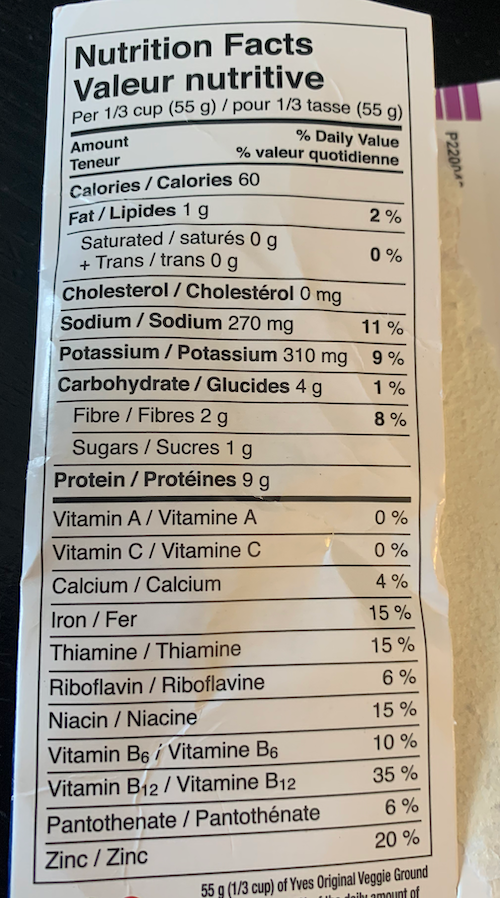 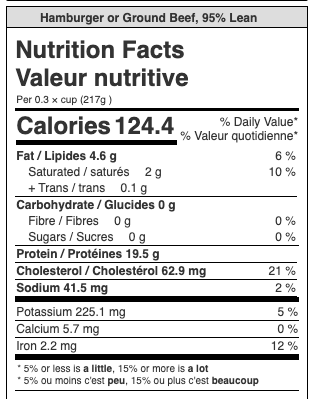 The bottom line? This is a yes for me, in the right dish, as we don’t eat beef, and it’s more convenient and heart-healthy anyhow. Just make sure your other ingredients are low in sodium. (No-salt-added canned tomatoes and beans, etc.)

There are so many plant-based products on store shelves these days! What have you found that you really like? If you’ve tried one of these, what did you think? Join the conversation in our free private Facebook group!