Well, not literally a grain of salt. You know, sodium and all. (#joke #cornyIknow)

Today is World Diabetes Day, so I was planning to share a few simple words about prediabetes, which comes up often in my practice. An estimated 22% of Canadians have it. Yikes!

Then I saw one too many diabetes articles on Twitter today casually advising people to lose weight or pushing one restrictive diet or another, so I decided on a last-minute rewrite to include my two cents on all of that. And now it’s after 10pm and I’m at 1700 words. You know me.

Anyhow, if you’re over 40 and haven’t been tested lately, it’s worth asking your doctor, especially if you have one or more risk factors, because finding out you have prediabetes is a helpful early warning signal. But beware of some of the advice that comes after that diagnosis.

A quick intro to prediabetes

Prediabetes is just what it sounds like. People with prediabetes are more likely than others to develop diabetes. If you have one or the other, don’t blame yourself. Genetics and socioeconomic circumstances are big contributors too, and a little self-compassion goes a long way.

(And we’re talking about “pre” type 2 diabetes. Type 1 is an autoimmune disorder that usually appears in childhood.)

Prediabetes means your blood sugars are higher than normal, but not as high as they would be with diabetes, at least for now. Diabetes is a progressive disease, so if you do nothing, there’s a good chance it will get worse. And even before it evolves into diabetes, prediabetes raises your risk of heart disease as well as kidney disease.

That’s the bad news. The good news is that once you know, you can act to delay or possibly even avoid diabetes. But how? This is where things get complicated.

Question a focus on weight loss

The first advice you might hear is to lose weight. The guidelines encourage weight loss, but the problem is, as I discussed in depth a few weeks ago, we don’t have a safe, effective way of delivering lasting weight loss. Our bodies stubbornly defend their weight.

One reason weight loss is so often mentioned is the landmark Diabetes Prevention Program (DPP) study, which randomized a diverse group of people at high risk for developing diabetes to an intensive lifestyle intervention, the drug metformin, or placebo.

Compared to the other groups, the people who did the intensive lifestyle intervention were less likely to develop diabetes. Some of them did, but on average, it took them longer to get there. Good so far. They also saw an improvement in cardiovascular risk factors like blood pressure, although there weren’t enough cardiovascular events to say if it helped in terms of those ultimate outcomes.

The people in that intensive lifestyle intervention group initially lost, on average, 7% of their weight, so in the neighbourhood of 15 pounds. Of course, some lost more, some less. Bodies are like that.

And by around year one, weight started to creep back on, as you can see in the purple line below. Weight loss studies pretty reliably look like this too. By year five, their weight was back to about where the metformin group landed. 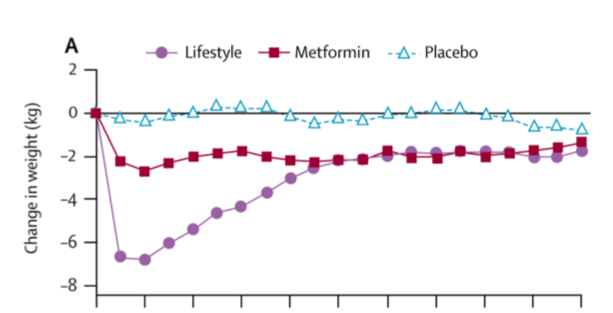 Many people focus on the weight loss in this study, but I like to look instead to look at what people were doing. Because you can’t do weight loss, but you may be able to do an early morning walk. You can cook dinner and skip the drive thru, but you can’t will yourself to be a certain size.

Maybe you’ll lose weight (temporarily), maybe you won’t. So find other ways to measure of success.

So what did the DPP participants do?

I think it’s worth looking at what exactly this intervention entailed. Intensive is an understatement.

Participants went to supervised exercise sessions twice a week. Attendance was voluntary but documented. It’s like having a personal trainer in your corner.

They were also assigned a case manager, usually a registered dietitian, who met with them at least 16 times in the first 24 months to go through the DPP curriculum. After that, they met at least every two months. 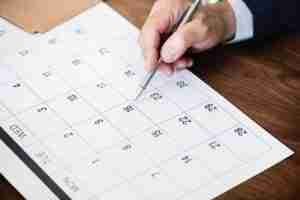 Photo by rawpixel on Unsplash

Think about that. On top of going to supervised exercise twice a week indefinitely, you meet with a dietitian once every week or two for nearly six months and continuing, albeit less frequently, thereafter. That takes a lot of motivation, time, and support. Much more support than people typically get outside of clinical trials.

I’ve been a dietitian for 13 years now, and I can only recall a couple of people who were able to see me 16+ times. People have jobs, families, and lives to live. And the cost. How many people have the financial means, insurance coverage, or access to a publicly-funded program this intense?

But interestingly, temporary weight loss aside, the intensive lifestyle intervention did delay progression to diabetes, and that’s something. So aside from all those appointments, what did they actually do?

People in the DPP study were encouraged to do at least 150 minutes a week of physical activity, divided between three or more sessions, and move more in their regular life (i.e. take the stairs, etc.).

Experts agree that physical activity is critical for blood sugar control as well as long-term health. But you knew that, right? But how to make it happen?

It might help to know that the activity itself was quite flexible. Depending on what was available in their community, people attended classes at rec centres, cardiac rehab programs or with personal trainers. They were encouraged to do (brisk) neighbourhood group walks, aerobics classes, bicycle riding, skating, swimming, or strength training (up to 75 minutes a week).

I mention this because one of the keys to moving regularly is enjoying it! Is there something on that list, or similar to it, that makes you feel good, or at least might once you get a bit of practice, comfort, and fitness under your belt? How about worrying less about how many calories you’ll burn and more about what might even qualify as fun? 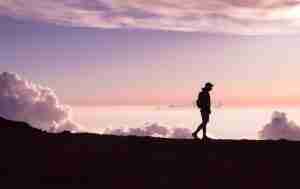 Photo by Jad Limcaco on Unsplash

(Take a peek at this blog post about skating on our local mountain lakes. That’s the kind of joy I’m talking about.)

Another thing that helps is thinking about what benefits you can enjoy today, not some abstract time in the future. I exercise most days because it wakes me up, gives me energy for the day, and helps me sleep. Long-term prevention of health problems is a bonus, but it’s not enough to get me out of bed a half-hour earlier. You?

Next: Question a ban on carbs

This one we don’t hear from as many medical professionals, but it is a common notion. Truth is, you can manage blood sugars and still eat carbohydrates, even sugar.

But if high blood sugar is a problem, and carbohydrates are broken down by our bodies into blood sugar, why not limit them completely? Why not adopt Atkins, or its contemporary cousin, the ketogenic diet? (Or South Beach, Paleo, Wheat Belly, or any of the others that came before or in-between?)

Cravings and pasta/bread/cookie guilt seem like minor inconveniences next to the increasingly recognized problem of binge eating disorder, which is also linked to restrictive eating. 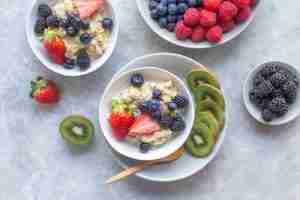 Photo by Melissa Belanger on Unsplash

And carbohydrates are found in some of the foods most strongly associated with long-term health: Vegetables, fruit, legumes, whole grains, milk, yogurt. The Diabetes Canada guidelines list numerous dietary approaches that have resulted in improvements in blood sugar control, and every one with a documented cardiovascular benefit includes carbohydrates.

Yes, cutting back may be helpful, especially sugar sweetened beverages and juice. And yes, some carbohydrate-rich foods are more nutritious than others.

But is it necessary to completely deprive yourself of the fibre, nutrients, pleasure, and convenience these foods bring? No. If you enjoy a low-carb diet, and do it in a way that doesn’t result in nutrient-deficiencies, go for it. But you don’t have to, and the long-term outcomes aren’t clear.

Mental health is addressed in the guidelines, but in my experience, people focus on it much less than diet, exercise, and weight loss. Too bad, because emotional wellness is foundational for healthy living. As they say, there is no health without mental health.

Anyhow, suffice to say that if you struggle with anxiety, poor sleep, depression, or excessive stress, you may be well-served to get help there first. Which brings me to…

Physical activity, healthy eating, and stress management are the cornerstones of diabetes prevention. All easy to say, harder to do, but definitely doable. Start with what’s reasonable for you and seek out what support you can access. We’re here to help you set goals, plan, problem-solve and take on this challenge. And to cheer you on. You’ve got this. 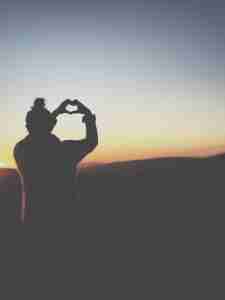 Photo by Cerys Lowe on Unsplash

The least expensive nuts and seeds for heart health