Since I published my guide to eating well after a heart attack, two people have emailed to ask this question. This FAQ will definitely be in the next version, but for now, I’ll answer it here: Nope. If you like the taste of sea salt better, go for it, but don’t be fooled by slick marketing. It’s not any healthier.

“I’ve read the labels,” you might be saying, “And sea salt is lower in sodium.” Maybe a little, but not enough to matter.

Most of the difference you see when reading labels results from sea salt often being more course than regular table salt. More course = more air in the typical 1/4 teaspoon described on the label, which means there’s just less salt in there. You achieve the same effect just by using less salt.

Take a close look at these labels (you can click the picture to see it better). The serving size is a 1/4 teaspoon for both, but the table salt, being finer, packs more salt into that 1/4 teaspoon. The weight of the serving is 1.5g vs 1g for the sea salt. That accounts for most of the difference in the sodium content. 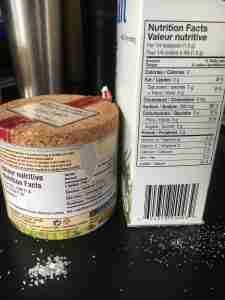 But yes, if we adjusted that serving size for weight, 1.5g of the sea salt would contain 555mg of sodium, compared to 590mg for the table salt, so a bit lower — but it still contains about 93% of the sodium in the table salt.

That’s comparable to this analysis of three popular types of sea salt, which found that they contained 86-98% as much sodium as table salt. Why are they a little lower? Because of the other minerals in there.

Claim #2: Look at all of the trace minerals in our sea salt! It’s practically medicine.

Yes, the levels of trace minerals are higher, but again, not high enough to have an impact on your health. One sea salt purveyor says, “The most important of these are potassium, magnesium and calcium.” Let’s look at that.

According to the analysis above, Himalayan sea salt is 0.16% calcium. That’s a trace amount alright. A 1/4 teaspoon of sea salt contains about 1g (1000mg) of salt total, so at 0.16%, we’re talking about 1.6mg of calcium. A glass of milk will give you about 300mg. ONE almond contains 3mg of calcium. Promoting the calcium in sea salt is ridiculous.

How about magnesium? Celtic sea salt is touted as higher in magnesium: 0.3% from the analysis above, so a 1/4 teaspoon of it would work out to about 3mg of magnesium. How about a quarter-cup of black beans instead? 21mg of magnesium. Adults need about 300-400mg of it a day, so sorry, sea salt isn’t going to make a dent.

I could go on, but hopefully you get the point.

The one thing those minerals might do is contribute to a subtly different taste, and if you like that, then use sea salt. But you can get essential minerals by eating a variety of wholesome foods.

Typical table salt has iodine added to it, which we need to make thyroid hormone. (Not having enough iodine can lead to enlargement of the thyroid (goiter), hypothyroidism and even intellectual disabilities in infants and children whose mothers were iodine deficient during pregnancy.

This sensible public health measure has virtually eliminated iodine deficiency where it is practiced. But like vaccines, people sometimes forget about these long solved health problems and then get suspicious of the science at work preventing them.

Some people say they prefer the taste of iodine-free salt, so if that’s you, you super-taster, just make sure you get iodine elsewhere in your diet: Seaweed, seafood, dairy products, meat, some breads, and eggs.

What’s so bad about sea salt?

Mainly it’s the cost that gets me. 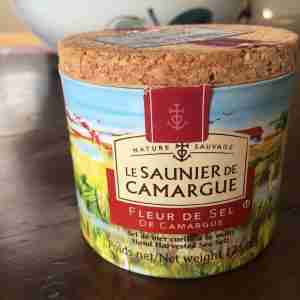 Hand harvested people. Get your wallets out.

I hate to see people spending more for food because they’ve been misled into believing it’s healthier. The cheapest sea salt costs 3-4 times as much as regular salt, and the premium stuff can go for 20-30 times as much.

The ad that comes up on Amazon when you search for sea salt is for Himalayan pink sea salt at $15 for a shaker. An extra serving of salmon would cost you less and do more for your heart health.

And then they add it to all sorts of foods — popcorn, chips, granola bars, etc. — giving those foods an undeserved health halo and contributing to people getting too much sodium. Do they taste better? Not any more than if they were dusted with regular salt. But they sound better don’t they?

Why I do use sea salt occasionally (!)

For one, I have sea salt in my kitchen because I like to experiment. (I can’t taste a difference, but I don’t have the most sophisticated palette.)

I do think, however, that finishing a dish with a dusting of course salt or salt flakes gives a nice burst of flavour without too much sodium. If you want that texture, you’ll need sea (or kosher) salt. Just a little, and only on dishes without much sodium in them. (If you’re concerned about that, read this.)

Anyhow, that’s when I reach for the sea salt. Putting sea salt into a dish where it will just dissolve, like soup or baked goods, is a waste of money.

If you the cost isn’t an issue and you like the taste or texture, by all means, use a little sea salt here and there. But don’t be fooled. It’s no superfood. Eating more of it just ups your sodium intake, which few of us need.