Do you LOVE peanut butter? It’s delicious, right? And if you don’t have allergies in your house, peanut butter can be a heart-healthy, affordable, convenient, nutritious protein source.

People often tell me they think it’s “bad.” Not so! (Either way, can we not think of food as good or bad, please? No judging. It’s your overall pattern of eating and other health habits that really matters.)

Here’s a quick run-down of your choices:

Which one is right for you? The healthiest one you really enjoy! The differences are minor. And as for crunchy or smooth, it’s up to you. It won’t make a difference, healthwise.

Really, that’s all you need to know. But if you’re a fellow nutrition nerd, read on… 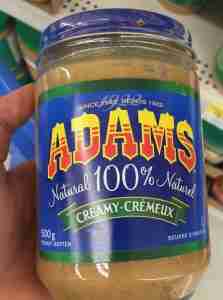 I think most people know this is the most nutritious choice. After all, you’re eating nothing but ground up peanuts and perhaps a bit of salt. Each two-tablespoon serving gets you about 7g of protein. When you consider that we’re aiming for at least 20g at every meal, it’s a good start. Pair it with a glass of milk (8g), a slice of whole-grain bread (5g), and you’re there.

But what about all of that fat, people ask? If you’ve been paying attention since the 90’s, you’ll know that eating fat is fine. Peanut butter is mostly unsaturated fats, which can actually lower cholesterol (a little). It’s also a good source of other nutrients, including the B vitamin niacin, magnesium, zinc, potassium, and manganese.

What about the salt/sodium? If you like salt-free natural peanut butter like Presidents Choice Blue Menu Just Peanuts, Costco’s Kirkland, or Kraft All Natural, that’s great. If not, keep it in perspective. The amount of salt added to peanut butter is small: It works out to just 110mg of sodium per two tablespoons (for perspective, Hypertension Canada recommends keeping your sodium to 2000mg per day). Hopefully the rest of your diet is low enough in processed and restaurant foods that you have room for that.

A few tips to help with the pesky stirring problem of natural PB:

If you like natural peanut butter, go with it. If not, give it a try. You might develop a taste for it. But if you really, really don’t like it, your next best option is a bit of a tossup. 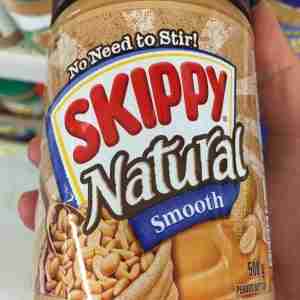 This sounds like the perfect compromise, but unfortunately, it’s not quite the same as the original naturals. Just check out the ingredients list:

Palm oil and sugar may be “natural”, but that doesn’t necessarily mean healthier. Compare the Nutrition Facts. See the differences?

The palm oil bumped up the saturated fat and squeezed out enough nuts to send the fibre and iron to zero (these values all get rounded to the nearest gram). Why is the protein higher? It’s usually right around 3.5g per tablespoon, so depending on the exact amount, it may round to 3g or 4g.

Surprised by anything that didn’t change? The sugar! That’s only because they round to the nearest gram. So in theory, the Adams brand could be 0.8g of sugar, the Skippy could be 1.4g, and they would both say 1g.

Adding sugar might sound bad, but keep it in perspective: A teaspoon of sugar is 4g, so you’d have to eat quite a bit of peanut butter to get even that much.

Bottom line: It’s hard to claim that this natural peanut butter is much better than regular. And since palm oil production is considered one of the world’s leading drivers of deforestation, I’d give it a pass. We can stir a jar of peanut butter, right? 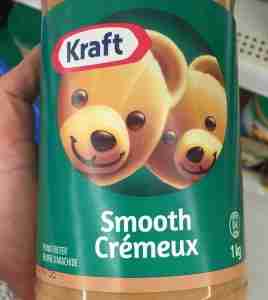 This is the PB that most people eat – about 93%, in the US at least, according to one report. The ingredient list typically looks a bit more ominous than the natural brands, as you can see in this Kraft Smooth: 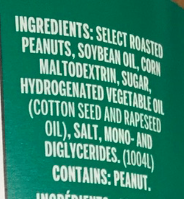 The other ingredients might sound unfamiliar, but they aren’t harmful. Even the vigilant Centre for Science in the Public Interest calls maltodextrin and mono- and diglycerides safe.

Would it be better to avoid them? Maybe. But will they actually hurt you? Not likely. We have much bigger nutrition problems to worry about.

All of this amounts to surprisingly minuscule differences in terms of nutrients:

Bottom line about regular peanut butter: Not as healthy, but not terrible either. Finding your food sweet spot is about choosing the healthiest food you can truly enjoy so if you really, really can’t stand the oil on top, go with this. 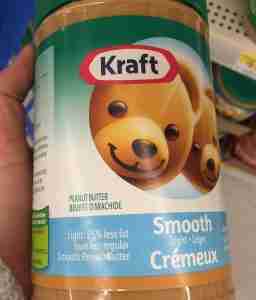 Light sounds good, right? It’s a confusing term. Products labelled “light” are 25% lower in either fat or calories, in Canada at least. The trouble with light peanut butter is, they took out 2g of (mostly healthy) fat and replaced it with 2g of rapidly digested carbohydrates (the corn maltodextrin and/or sugar). Turns out this raises cardiovascular risk. And you save just 10 calories per tablespoon. Not worth it.

Light peanut butter is one of the ten pitfalls I mention in my free video series for people living with heart disease. If you want to avoid the others, you can access it here.

And if you really want to save a few calories, consider… 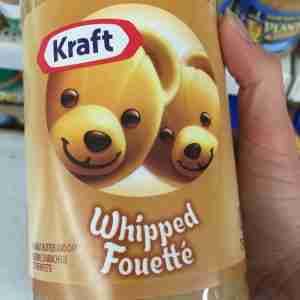 When I lined up all of the peanut butters to compare them side by side, I was surprised to see that whipped peanut butter saves a few calories without adding the extra carbohydrates. How? Just by incorporating a bit more air and a bit of fancy molasses. (Still, just one gram of sugar per serving, so it can’t be too much.) 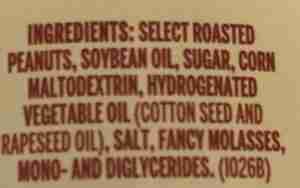 I didn’t give it much thought until dietitian Emma enlightened me about it tasting so good. She also says it melts nicely into hot cereals and spreads better. As a bonus, that might make it an option for those with swallowing difficulties.

But again, perspective: Saving 20 calories on two tablespoons of peanut butter won’t make much of a difference in the grand scheme.

So is your favourite peanut butter “healthy” or “unhealthy”? Turns out health doesn’t work like that, and that kind of thinking can jeopardize your relationship with food. It’s the overall pattern of eating that really matters, along with your exercise, sleep, and self-care habits.

If you like the natural peanut butter with oil on top, good for you. But not everyone does, and we need a way to communicate that a food can be slightly less nutritious without being “bad”. Perhaps Fooducate has the right approach, rating various peanut butter products from A- to B-. No F’s here.

If you have regular old peanut butter occasionally, but still eat lots of fruit and vegetables, mostly whole grains, beans, other nuts and seeds, fish, and very few ultra-processed foods, don’t sweat it. Sure, they add a little bit of sugar, salt, and common additives to it, but not very much. However, if you eat it every day, like we do, you might want to try the oil-on-top natural.

Whatever peanut butter you decide on, remember to enjoy it!

Have you had a heart attack, bypass surgery, or other heart event? You may enjoy my free video series, How to Eat Well For Life After a Heart Event. After 15+ years working with people living with heart disease, I had some insights to share! I cover the six keys to success, 10 pitfalls to avoid, and frequently asked questions.