(Note: Beyond Meat sandwiches were discontinued at Tim Hortons in every province except BC and Ontario in September 2019.)

Although my furnace kicked in this morning, it is ostensibly summer and we Canadians are getting out on the road. Even if you’re not one to go out of the way for Tim Hortons, sometimes it’s the handiest option near a highway or in the airport.

Last month Tims became the latest food vendor to jump on the plant-based bandwagon, unveiling three Beyond Meat Breakfast Sandwiches. If heart health is a priority for you, are these sandwiches worth looking at?

Well, they’re a little higher in protein and fibre, lower in saturated fat and sodium than the regular sausage breakfast sandwiches. But that’s not saying much! We can do better, at Tims and with food from home.

You might still go for one if you enjoy a breakfast sausage sandwich but shun meat for religious reasons, out of concern for animal rights, or for the environment. Tim Hortons says that “Beyond Meat® uses significantly less water, land, and energy to produce than meat, and generates fewer greenhouse gas emissions than meat production,” although some believe that claim is based on faulty science.

In terms of cardiovascular health, at least, I can tell you that it’s a bit closer to what’s recommended, but not much. Here are a few details, if you’re curious:

I always like to peek at the ingredient list too. This is for just the Beyond Sausage patty:

Wow. I counted 37 ingredients! Looks alarming at a glance, but contrary to popular lore, you can’t judge a food purely on the length or pronounceability of its ingredient list. Consider this:

Anyhow, if lengthy or tongue-twisting ingredient lists put you off, the pork sausage is probably out too:

Shorter, but if you don’t count the vitamins and minerals added to Beyond Meat, they’re comparable: Both are fairly highly processed products.

“Plant-based” is an ill-defined term. Some use it to refer to vegan or exclusively plant-based diets, and if you’ve seen the documentary Forks Over Knives, you know that it’s touted for reversing heart disease. But the evidence for that isn’t strong, and they were using what they call a “whole foods plant-based diet,” not highly-processed imitation meat.

Others mean eating patterns based on more food from plants, like vegetables, fruit, whole grains, nuts, seeds, and legumes, but not necessarily only food from plants. Mediterranean-style eating is an example. That’s how Health Canada uses it in the new Canada’s Food Guide. Interestingly, just a few lines below where they talk about eating more plant-based food, they say that “Most healthy eating patterns include little to no highly processed foods.” So again, Beyond Meat isn’t quite what nutrition experts mean when they suggest eating more plant-based foods.

How do the Beyond Sausage Sandwiches taste?

I couldn’t find anyone who had tried them, so I hit a Tim Hortons between appointments today. The things I do for you people! Haha. 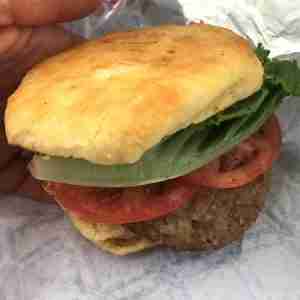 I suppose it kind of tasted and felt like sausage – meaty, and a bit spicy – but partway through eating it I realized I’m probably not the best judge, as I don’t eat the regular ones. I don’t even like sausage. And I’m not thrilled about a sandwich in a biscuit. Seemed awfully bready to me. So not a fan. If you’ve tried them, let me know what you thought!

Which one to try if you’re curious?

Of course start with what sounds good to you! But if you’re looking for a nutrition comparison, here are how the three options compare, in terms of those same nutrients. I estimated the numbers in the final column. (You may have to turn your phone to read it.)

Unless you really like the biscuit, I’d ask them to make yours in a wheat ‘n honey or 12 grain bagel instead, or a regular whole wheat bun. Ask them to add real cheddar cheese instead of the processed, and/or an egg if you like. You’ll blow their minds. 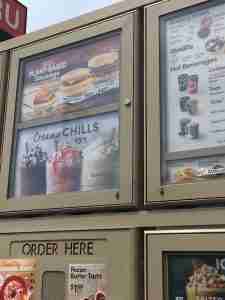 If you like Beyond Meat products and you prefer to not eat animals, now you have another choice. Yay for choice! We all have a fast-food meal now and again. #roadtrip

But if you’re choosing it for heart-health and that’s a priority for you, there are better options. Tune in next week and I’ll highlight some other choices at Tim’s. Or, you can always download my heart-healthy on the go snack list and brown bag it.

You'll also sign up for my sweet spot eating tip of the week. You can unsubscribe anytime.
Trust me, I hate spam too.