You’ve heard it before: Whole grains are good for us! Eating more whole grains has been tied to lowered incidence of heart disease, diabetes, constipation, diverticular disease, and possibly even some cancers. But if you’re like most people I work with, your intake falls short of the “more than half your grains” recommendation we’ve heard for so long.

While crackers usually have more salt and fat added to them than unprocessed whole grains like oats and barley, they’re portable and crunchy and a great vehicle for toppings from hummus to tuna salad. So if you’re going to pick up crackers, why not go for whole grain if you can find some you like?

Whole-grain crackers are few and far between at conventional stores. You’ll usually find Triscuits, rye crackers (Wasa, Ryvita), and perhaps a specialty cracker or two in the natural foods section where they sell gluten-free products. But most crackers on the market are made of mostly white flour or white rice.

Costco, on the other hand, carries some unique and tasty whole-grain crackers, chips, and similar products. They’re gluten-free too (although that doesn’t make them a better choice unless you have a medical reason to avoid gluten).

Comparing crackers can be tricky because the serving sizes aren’t always the same. So (geek alert!) I made a spreadsheet converting key nutrients for each into 30 gram (one ounce) servings so we can compare head to head.

Unfortunately, many of  the beneficial nutrients in whole grains — potassium, magnesium, vitamin E, B vitamins, phytochemicals, and antioxidants, for example — aren’t required on the label. So we’ll use the fibre and other nutrients they do show as a proxy. If there are more of them, we’ll assume there’s more nutrition in general. You can take a peek at the spreadsheet if you’re a numbers geek too, or just read below for highlights. 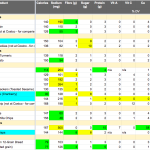 For a party or occasional treat, any cracker is fine. But if you’re picking up crackers every week or two, here are a few Costco products that give you a bit of whole-grain nutrition along with that crunch. 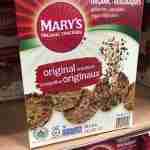 These are popular at our house and I see them often in food records. They’re thick and hearty with a firm crunch, but not dry like a Triscuit or melba cracker can be. The first three ingredients are brown rice, quinoa, and flaxseeds, so no surprise that they have a little more fibre than most (3g vs 2g for other whole-grain crackers and 0-1g for refined grain crackers), as well as a bit of calcium and iron. Too bad they’re on the high side for sodium (190mg vs 110mg for the Crunchmaster Multigrain and 55mg for the Low-Sodium Triscuit). 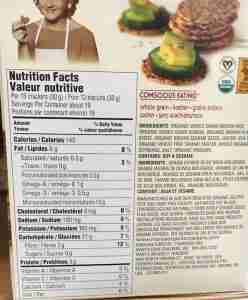 Still, a great whole-grain choice, especially if you pair with a lower-sodium topping. Sliced tomato and fresh mozzarella perhaps? 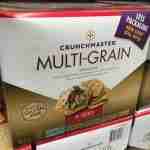 We buy these often and really like the taste and light texture. They’re also considered a whole grain, because the first ingredient is brown rice flour, followed by sesame seeds and then nutrition-poor potato starch. Still, they’re not bad, with 2g of fibre and the most iron of any cracker I saw, thanks to the variety of seeds in them. 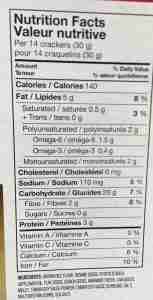 Believe it or not, that’s the end of whole-grain crackers at Costco! (At least what they have at my Costco this week.) But there are a few honourable mentions below. 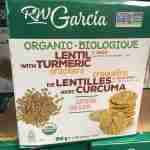 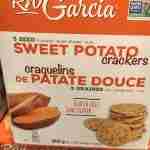 These aren’t whole grain, because the first ingredient is corn (not whole corn). (“Stone-ground yellow maize” is corn, but it sounds better, doesn’t it?) Sorry to say, stone-ground is not necessarily whole grain.

Nonetheless, I think they’re worth looking at because the other ingredients — lentils, seeds, sweet potato powder — add a bit more nutrition, although not as much as you might expect! In fact, and this drives me crazy, a serving of the sweet potato cracker has ZERO vitamin A, despite a quarter-cup of sweet potato cubes having 95% of the daily value of vitamin A. (I’m having flashbacks to “fruit” smoothies at Tim Hortons.) 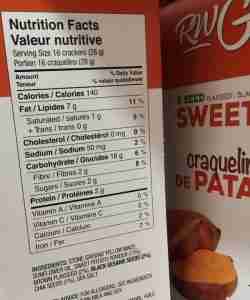 They do at least have more fibre than refined grain crackers, and the lentil/turmeric ones have 9% of the daily value of iron. Don’t get excited about the turmeric being anti-inflammatory though. The evidence isn’t that strong and it would take more than what’s in the crackers to maybe impact heart disease risk or arthritis. Still, doesn’t hurt if you like the flavour. 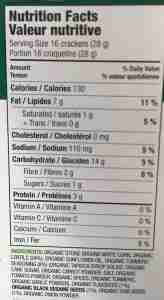 I haven’t tried either of these, but when I asked on Instagram and Facebook, the responses were equally enthusiastic for both. Natalie, who runs the popular Costcuisine blog, commented on Instagram:

Several others agreed. I probably wouldn’t have the sweet potato ones in the list except they are at least low in sodium. So think of them as healthy(ish) crackers, not a replacement for eating actual sweet potatoes or lentils. 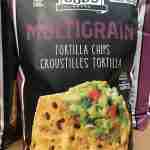 Interestingly, the “Food Should Taste Good” Multigrain tortilla chips are very similar, nutritionally, to the RW Garcia crackers, with 2 grams of fibre and 3 grams of protein. The first three ingredients are corn, oil, and brown rice flour, but at least they’re followed by a variety of seeds, like the RW Garcias. They also only have 80mg of sodium. 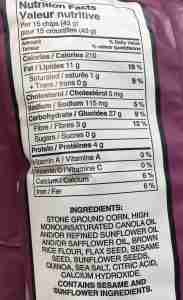 Somehow crackers seem healthier than chips, but in this case, not really, so buy whichever ones you like and/or are on sale.

I included the regular Kirkland tortilla chips in the spreadsheet above as well, for comparison. They’re not that different, really, except they don’t have all of those seeds, but it doesn’t amount to much difference nutritionally. 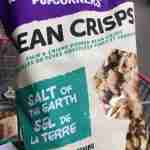 Plus I sampled them in the store and found them tasteless and dry. This is just another souped up corn chip. If you like them, great. Maybe pair with hummus and they’ll be okay. But if not, pass. 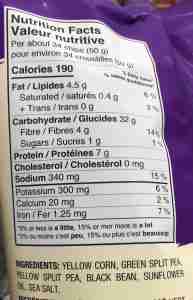 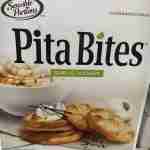 Oven-baked pitas sound healthy, but when you see that the first ingredient is enriched wheat flour, read “white flour.” It’s not terrible to eat occasionally, but I don’t want you to be misled. This is just a plain white cracker. Nothing special. We can do better. 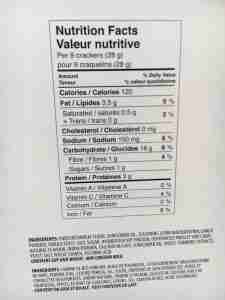 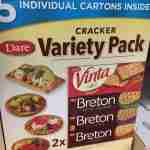 Ugh, multigrain. Means nothing more than multiple grains. They may all be refined or whole, so check out the ingredients list. With (not whole) “wheat flour” as the first ingredient followed by oil and then a whole pile of whole grains lumped together, it’s not much better than a regular refined grain cracker. Note that they’re using a serving size smaller than my standard 30 grams, so I scaled the nutrition information up in the spreadsheet for comparison. 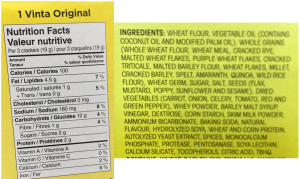 Anyhow, Bretons taste like cardboard, in my humble opinion. Pass. 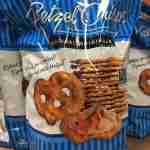 Back when low-fat was the leading nutrition message, somehow the idea got out there that pretzels are healthy. By now you should be able to predict what I’m going to say. First three ingredients wheat flour, sugar, and salt. No thanks. This is one of the highest sodium cracker-y products they sell. 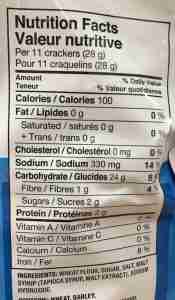 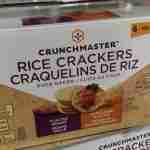 Rice crackers are my pet peeve! They’re gluten-free so people think they must be healthy, but they are actually less nutritious than most white flour crackers, due to the fact that the rice doesn’t have to be fortified like refined wheat does.

(You know how it says enriched wheat? That means they add back some of the nutrition —  iron, folic acid, thiamine (vitamin B1), riboflavin (vitamin B2), and niacin (vitamin B3) — that’s lost when the bran and germ are removed. That isn’t required with rice.)

Check the label and you can see: ZERO fibre, vitamin A, vitamin C, iron, and calcium for the Four-Cheese flavour, and a measly 2% calcium for the Toasted Sesame flavour, but zero of the others. If you need to go gluten-free, go for something like Mary’s or the Crunchmaster Multigrain. 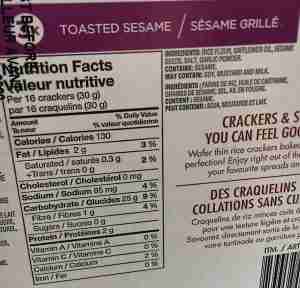 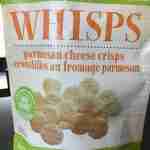 One last cracker-like product at Costco is Whisps, baked parmesan cheese crisps. I’m including them because they have a texture like crackers and they’re kind of enticing, being grain-free and high in protein and calcium. (Literally the only ingredient is parmesan cheese.)

I love the taste of these and use them on salads in place of croutons, but even I was surprised to see that when I scaled up the serving size to 30 grams for this analysis, the sodium content went up to 500mg. Holy smokes. A little goes a long way. 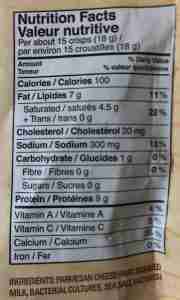 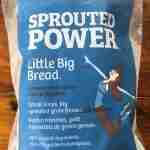 Since we’ve really only landed on two whole-grain crackers here, I wanted to suggest that toasted whole-grain bread is an option too. The sprouted grain breads in particular give you as much or more fibre and protein than crackers, for fewer calories (because they have less fat).

Add peanut butter, hummus, avocado, or brushetta and they make as nice a snack as any of the crackers here, in my humble opinion.

As I always say, nutrition isn’t a black and white topic. Don’t think of any of these products as good or bad. It’s really more about portion size, balance, frequency, and personal choice.

If you’re looking for crackers, chips, crisps, or other crunchy snacks to incorporate into your regular shop, look for a whole grain as the first ingredient and a reasonable sodium level. At Costco I’d say Crunchmaster Multigrain or Mary’s most of the time, with the RW Garcia Sweet Potato or Lentil with Turmeric or the Food Should Taste Good Multigrain chips thrown in for variety. We also usually stock Low-Sodium Triscuits, not sold at Costco, as well.

And if you want the benefits of lentils, seeds, or sweet potato, just eat them. Adding them to crackers might add a tiny bit of nutrition, but it’s mostly for show.

Note: I wrote a second part to this post, because I missed these four interesting ones. 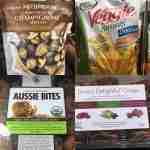 (Not sponsored! Never sponsored. You get my opinions and expertise here, never paid promotions.)