A client told me last week that she loves Caesar salad, but her doctor told her that’s the “wrong” kind of salad. Truth be told, I like Caesar salads too, so I thought this would be a fun one to tackle on the blog. If you’re focused on heart health (including blood pressure, sugar, and/or cholesterol), where do they fit?

First of all, healthcare professionals, never do this! If someone is trying to tune up their diet and you think they’re doing more harm than good, say, “Glad to hear you’re working on healthy eating! Would you like to talk with a dietitian? They’re so good with helping people find meal ideas and recipes that work for them.”

Calling a food “wrong” is a surefire way to help a person give up and feel bad. Talk about counterproductive.

People choose foods for a variety of entirely valid reasons, from convenience to sustainability, cost, health, and most importantly, the intricate calculus of which food will hit the spot. We ignore that consideration at our peril. No one likes to eat food that doesn’t satisfy.

Anyhow, Caesar salads are okay, healthwise. Some variations more than others, but let’s not dismiss the whole genre!

If you weren’t having a Caesar salad, what would you be having? A garden salad? Steamed broccoli? Or as my 11 year-old said when we were discussing this post at dinner: “At least it’s better than French fries!” So for fun, I thought I’d start with a restaurant comparison.

I pulled up the nutrition for Boston Pizza, because they’re nice enough to make this available, and they offer both. (You may have to turn the chart sideways to read it better.) 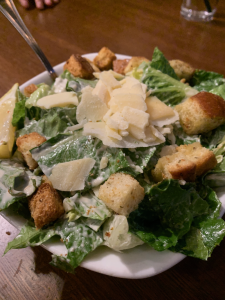 Compared to the fries, that little side Caesar looks pretty good, right?

But the higher fat in the Caesar might jump out at you. For so long we were told that fat = bad, but not necessarily! This one is 12 grams of fat in total, of which 3 grams are saturated fat. That means most of the fat, 9 grams, is the heart-healthier unsaturated fats!

And while eating a lot of saturated fat can raise our cholesterol levels, it turns out that eating a lot of higher glycemic index, refined carbohydrates (say French fries) is worse for heart health.

Anyhow, the amount of saturated fat in this small side salad, 3 grams, isn’t that much! To put it in perspective, if you were aiming for a conservative 7% or less of calories (guidelines vary), that would be about 16 grams or less for the whole day (based on eating 2000 calories). So we’re not losing sleep over 3 grams.

Are there heart-healthier sides you could order? Sure. Let’s look at a garden salad or seasonal vegetables.

Certainly the others also have less saturated fat and sodium as well as more fibre than the Caesar, but in the grand scheme, the differences are pretty small. Don’t worry about the cholesterol. (See why here.)

So the real question is, do you like garden salad or plain veggies? Would that hit the spot? If so, great, have them! But if you have a real hankering for Caesar, it’s really not the end of the world.

But more often than not, I bet you’re eating at home, especially these days. Let’s look at that.

What’s in a Caesar salad anyhow?

Let’s break it down. There are lots of variations, but the classic Caesar is made with…

While it may not make the “superfood” lists, this fresh and crunchy vegetable does pack some nutrition! Two cups chopped will give you more than a day’s worth of vitamin K plus about half of your folic acid and vitamin A (as beta-carotene).

And no matter how nutrient-packed any vegetable may or may not be, if a Caesar salad means you don’t order fries with your sandwich or eat another couple of slices of pizza, that’s usually helpful!

Tune it up? You could make your Caesar with kale or spinach if you like, but romaine is fine too.

Like other creamy dressings, people think Caesar salad must be high in “bad” fat. Not so! Most of the fat in these dressings comes from olive or canola oil, so it’s mostly heart-healthier unsaturated fats, as we saw in the restaurant nutrition chart. Read the label on any bottle of Caesar dressing at the store, and you’ll see that the saturated fat is a much smaller number than the total fat.

Yes there will also be a bit of egg and parmesan cheese, but we’re not worried about those either, in moderation. The one thing I will say about Caesar, as with many bottled salad dressings, is that it can be high in sodium.

Tune it up? If you’re using bottled Caesar, compare labels for sodium. There’s quite a range. If you’re making it yourself, just salt to taste. Lean on lemon juice, anchovies, good olive oil, and parmesan. Yes some of those also contain sodium, but they punch over their weight for flavour, so you won’t need much.

Croutons are certainly part of a classic Caesar, and they do add more refined carbohydrates and more sodium to the mix, but that’s not unique to Caesars. Lots of salads use croutons!

Tune it up? If you like, you could make (or buy) whole grain croutons. We usually do pumpkin seeds instead. They’re quick, easy, affordable (at Costco anyhow) and packed with more protein and minerals than even whole grain croutons. Or if you’re up for a quick project, roasted chickpeas are a great high-fibre alternative.

As I wrote a few months back, cheese in moderation isn’t bad for heart health, despite the saturated fat and sodium content. Studies show that people who eat more cheese don’t typically have more heart disease. Just make sure to leave room in your diet for vegetables, fruit, nuts, whole grains, etc as well.

Tune it up? Again though, I would suggest hunting for a parmesan cheese that isn’t too high in sodium. Most of them use about 30 grams (1 ounce) as the serving size, and the hard blocks will have about 200mg sodium in that.

On the other end, some of the pre-shredded products have 450-600mg of sodium per 30 gram serving! Especially high is the dry Parmesan found on the shelf, not in the fridge at the store, but they often use a lower serving size on their label so the sodium content looks lower. Not cool.

The hard blocks cost more but they last a long time and pack so much flavour that you just need a little.

A classic Caesar doesn’t have to have bacon, but it’s often added. It’s a small protein boost, but having a lot of processed meat in your diet is connected to more heart disease, diabetes, and colon cancer, so go easy. The good news is that it’s so rich that you don’t need much.

Tune it up? If a Caesar just isn’t complete without bacon, just have a little. If you don’t mind skipping it, even better!

All that said, what does the nutrition in a Caesar salad look like?

The Caesar salad at home

Let’s assume that you’re like many people and use dressing from a bottle. (If you’re making Caesar salad dressing from scratch — awesome — you don’t really need my help on this.)

So how does a typical Caesar salad made at home compare?

Pretty close right? It’s tiny by the way, just because I wanted to make it comparable in size to the Boston Pizza side salad.

Sodium is a bit higher, but if we make a point to look for lower sodium ingredients, we can easily address that.

A tuned up Caesar

Here’s the nutrition for a similar homemade salad with a lower-sodium dressing, fresh cheese, and pumpkin seeds in place of the croutons and bacon bits. Still easy and tasty.

Now that’s a decent salad! What you don’t see on this chart are all of the vitamins and minerals. If you want to boost those even more, some grated carrot or roasted bell peppers would be lovely additions.

Don’t worry about the higher calories. It’s quality calories we’re interested in, not shrinking our intake as low as possible.

If you want a bigger salad, I might go easy on the bottled dressing and also toss it with extra virgin olive oil and a little lemon juice. That way your lettuce won’t be dry but you’ll keep a lid on the sodium.

The dressing doesn’t have to be low-fat or “light,” by the way! Most of the fat is heart-healthy fat, right? Often the low-fat salad dressings lean on more sodium or sugar.

Of course you could make your own dressing, but I’m thinking of the many people who have neither the energy nor the inclination to do that. We can’t let perfect be the enemy of good here.

We have lots of flexibility in heart healthy eating. The balance between health and taste is up to you. There’s no rule that says you always have to eat the very healthiest stuff, all the time. How about something that’s pretty good, healthwise, and you really like it? That’s the Sweet Spot my friends!

The difference between a Caesar and a lower-sodium, more nutrient-dense pile of veggies is a lot smaller than the difference it would make to have less chronic stress and regular movement, so let’s keep it in perspective.

Caesar salads can certainly be part of your heart-healthy life if you’re a fan.

Join us if you’d like to talk all things Caesar salad and heart health in the (free) Sweet Spot Heart-Healthy Cooking Club in Facebook.