At the start of March, when we were stocking the pantry with a few extra staples, just in case, I ordered a bag of dried chickpeas in my online grocery order. When it came, it turned out to be a little bigger than I expected. 1.8kg, in fact, or about 4 pounds!

Then I discovered I already had a (smaller) bag of chickpeas.

So for the three months we’ve been eating a lot of chickpeas! Most have been turned into hummus, because my husband loves it, and I’m staying away from Costco where I usually buy it. ( 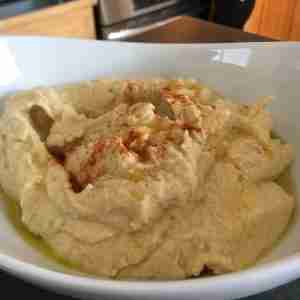 Never again! Homemade is much better.)

I’ve just tossed the rest into salads, pastas, or veggie bowls, without much in the way of culinary inspiration.

But this week I happened to take a picture of chickpeas in the pot and shared it on Instagram and Facebook, asking people what else they like to do with them. The ensuing chickpea love was amazing! People jumped out of the woodwork to share their excitement about the lowly garbanzo bean. They shared the most mouth-watering ideas and recipes! We’ve been missing out. I thought it might be helpful to compile their suggestions here for you. Some I’ve tried, some are completely new to me. A couple have made it into my meal plan this week, and the rest will keep me busy experimenting in the kitchen for weeks.

If you’re not much of a chickpea fan, it’s worth experimenting, especially now. Besides being versatile and potentially tasty, they’re shelf stable, sustainable, locally grown if you’re near Alberta or Saskatchewan, and affordable. I checked the price of a smaller (900g/2lb) bag at Superstore today: $3.28, which works out to about $0.20 a serving. (A No Name can of tuna, for comparison, is going for $0.75 per serving.)

Plus they’re good for you. You probably know that they’re rich in fibre and have enough protein to be considered a meat alternative (aim for 3/4 cup or combine with other protein sources). They’ll also help you get potassium (good for blood pressure), magnesium, B vitamins and more.

Besides the cholesterol-lowering effects of the fibre, chickpeas contain a plant sterol that interferes with the body’s absorption of cholesterol, also helping to lower blood levels. Bonus!

They’re also surprisingly easy to use, once you know what to do with them. Do dried chickpeas intimidate you or seem like a bother? I get it, trust me. As I sit here typing, I’m thinking I should get up and go soak some chickpeas to make later. But soaking and cooking is a cinch, as long as you think of it in advance, especially since we’re at home more these days. And you can even freeze them! Here’s a primer on how to do all of those things, if you need it.

Or just use canned chickpeas. If you can, find a “no salt added” variety. If not, give it a good rinse in a colander and you’ll wash away about half the sodium.

So without further ado…

What to do with all of those chickpeas

This one is first because it got the most mentions. There were as many opinions about how to make them as there were commenters.

Dietitian and Certified Diabetes Educator @anarallidina shared her recipe, which she describes as “crispy on the outside and soft in the inside.” She uses and air-fryer but says “you can easily bake in the oven or pan-fry them.”

@taniachimo said “The key to falafels is to just soak the chickpeas and not to precook them. We use Madhur Jaffrey’s recipe.” (It’s not online, but you can find it in her book World-of-the-East Vegetarian Cooking.)

My former colleague @alissa_chiara shared what is apparently the world’s best falafel recipe (food and travel writing gem alert!) and her tips for making it, which she says she does at least 3 times a month:

“Sometimes I take out the fava beans and swap for canned tuna. I sub a lot based on what I have – double the parsley instead of the cilantro or use more green onion instead of leeks. Same weight of chickpeas instead of fava beans or half half (fava beans if using should be the dried ones you soak in water). I’ve also baked instead of fried! It’s less yummy of course but still good. Trick I find is to just make sure they aren’t too wet since there is no egg or flour to bind them.”

This is not something I’ve made before, but I’m definitely going to give it a whirl now. Who’s with me? 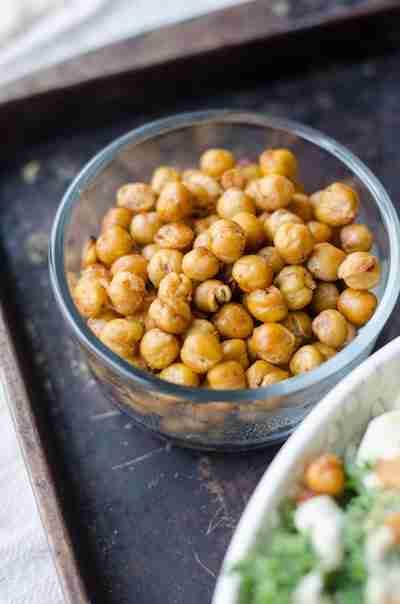 This was the second most popular answer. One reader said: “Roasting them as part of a veggie bowl. Yum.”

Another contributor on Facebook said: “I love chickpeas, in Mexico we roasted with chile and my mom would just cook them plain, no salt, and just pop them in my mouth.” Tricia Shimonov, also on Facebook: “Roast them! The best.”

A third chimed in further to help: “We have found dried ones roast better – I was doing convection bake – drizzled with oil, salt, pepper and sometimes paprika – seems like some burn before the others are done but they do get nice and crunchy.”

I like to roast them and add to pasta, as in this Crunchy chickpea and sun-dried tomato pasta. The trick is to use plenty of oil and roast until they’re good and crispy.

People also mentioned various curries. Edmonton dietitian @lalithataylor_rd said “Chana masala! One of my favourite Indian curries” and pointed me to this recipe. Chana masala is one of those things I used to love making, but had kind of forgotten about.

Karen Jorgenson Cooper shared this recipe for Curried Sweet Potatoes with Spinach and Chickpeas, saying “I tweaked it a bit (including more curry powder) but the basic recipes still holds.” Sweet potatoes too? Be still my heart.

And another follower chimed in on Facebook to say she puts them in butter chicken (and salads), which reminded me that sometimes I shortcut my way to a lighter butter chicken using the PC Blue Menu Butter Chicken sauce (not sponsored) and it works well with chickpeas too. It’s not homemade, but it’s less processed than you might expect, and it’s dinner in 15 minutes. Stir in some frozen peas or spinach and you can even get a quick vegetable in there. 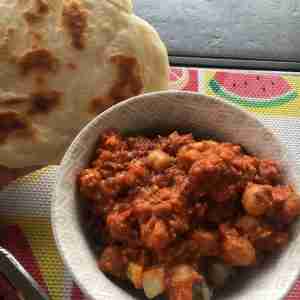 This one was new to me. Nancy Gibbons shared this recipe for it on Facebook, and we made it last night. How could we not? The sauce is pureed roasted red peppers and walnuts (yum!), and it’s ready in 20 minutes. Need I say more?

This is a Lebanese dish that I was introduced to by a Lebanese family in our school. The mom casually prepared it in our kitchen while we chatted, and you could see it was a staple in hers. Hela Sleiman popped onto the Facebook post to remind me about it, and shared this recipe and tip: “Instead of frying bread you can bake” Adding “This dish is made daily in ramadan (30 days) so delicious, satisfying and healthy!”

No I’m not kidding. If you’ve never done this, you’re in for a surprise. I think it was Jessica Seinfeld who first popularized this Chocolate Chip Cookies with Chickpeas recipe in her book, Deceptively Delicious. You just add whole chickpeas to a basic chocolate chip recipe and the texture is so similar to the chocolate chips, you hardly notice them.

(Don’t let the margarine put you off. If you don’t do margarine, you can just use butter or this Better Butter.)

All hail the mighty chickpea!

I could go on and on. We could do a whole post about salads. You could try them in sandwiches (like this one with avocado or this one with diced pickles, carrot, celery, and much more). But that’s enough for now. Did you find at least one new use for those trusty chickpeas? I hope so!

Let’s have a moment of gratitude for the ancient cultures that developed these recipes, and the creative cooks keeping them fresh and passing them along. So good.

(There are affiliate links in this post. That means at no cost to you, I will earn a small commission if you make a purchase.)