Raise your hand if you get a little overwhelmed in the yogurt aisle. There are so. many. choices! Searching for yogurt on the Superstore website gives 541 results (although about halfway through the list you start getting into the yogurt pretzels and popsicles). But still. A dizzying array of options.

The good news is that you just about can’t go wrong, nutrition-wise.

Got that? Read it again. No stress here. So deep breath, and have some fun with this!

Yogurt has been linked to a decreased risk of diabetes, high blood pressure, and heart disease too, as well as conditions like irritable bowel syndrome, and chronic inflammatory diseases such as Crohn’s disease, ulcerative colitis, and rheumatoid arthritis. So if you like it, it’s worth making a habit of it.

And choosing one is not really that complicated. We can really boil it down to a few key decisions: Greek or regular? Plain or flavoured? If flavoured, sweetened with sugar substitutes or not? Whole milk or low-fat? Then it’s just a matter of finding one you like.

There are a few other options, like Skyr, fruit-on-the-bottom, drinkable, and kefir, which isn’t really yogurt, but since it lives there, I’ll cover it. And there’s the probiotics question. Okay, maybe not so simple!

I’ll give you the quick low-down on each, and for now, I’ll skip the non-dairy and lactose-free yogurts, so this doesn’t turn into a book.

Greek yogurt has become more popular in the last decade, thanks to it’s significantly higher protein content and thicker consistency. If you like it (and not everyone does), I think getting that extra protein makes sense. Many people don’t get enough early in the day — Greek yogurt to the rescue! If not, there are other ways to get protein. No worries.

Nutrition-wise, plain is preferable because it’s lower in sugar. Some people don’t like the tart taste, but many I know actually prefer it, especially if mixed with fruit, nuts, or even something more unusual, like this peanut butter, cocoa powder, and honey yogurt dip (so good).

If you use fruit to sweeten plain yogurt, try a sweeter fruit, like chopped bananas or (my favourite) frozen mango or cherries, thawed overnight in plain yogurt. Yum! You may never go back to flavoured.

Photo by amirali mirhashemian on unsplash.com

Flavoured yogurt typically has about 3 teaspoons of sugar added to every (3/4 cup) serving, so if you want to sweeten yours yourself, if you use just 1-2 teaspoons, you’ll still be using less. Maple syrup blends in easily, and you don’t need much to take the edge off of plain yogurt.

But what if you really prefer the flavoured yogurts? I wouldn’t lose any sleep over that 3 or so teaspoons of sugar alone. It’s your overall sugar intake that counts, with guidelines suggesting less than about 6 to 12 teaspoons a day.

Just be careful combining with other higher-sugar breakfast items, like muffins (eg. 7 teaspoons in the Fruit and Fibre Muffin at McDonalds), juice (eg. 6 teaspoons in a cup of fresh-squeezed orange juice), or granola (eg. 6 teaspoons in the Vanilla Greek Yogurt with Mixed Berries and Almond Granola at Tim Hortons). I don’t know about you, but I like to save some of my sugar budget for chocolate.

Think of flavoured yogurt as a nutritious little dessert. Compare to a can of pop, which has more like about 10 teaspoons of sugar and no nutritional value. Now that’s sugar we should be concerned about.

The good news is that there are more and more  lower-sugar flavoured yogurt products on store shelves these days. All of these got a thumbs down from my family though, including me!

Plus all of the flavoured Skyr products I found are lower in sugar than regular yogurt (and I think they taste better… see below).

How much sugar is in my yogurt?

If you’re trying to compare these numbers to something in your fridge, you’ll notice I’m giving them in teaspoons, while the labels are in grams. I find teaspoons are more meaningful for people, but if you want to convert grams to teaspoons, just divide by 4. (There are about 4 grams of sugar in a teaspoon.) 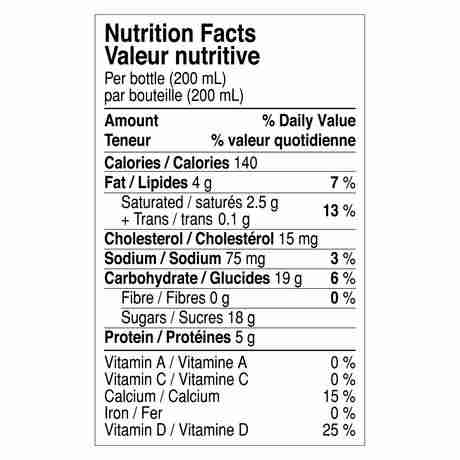 Also, plain yogurt naturally has about 1 teaspoon of sugar from lactose (milk sugar), and we don’t count that. So usually I subtract 4 and then divide by 4.

Also, if you’re comparing, keep in mind that I’m talking about a 3/4 cup (175 gram) serving size, but unfortunately, nutrition facts for yogurt use lots of different serving sizes.

If you want to take a peek at the spreadsheet I made to adjust serving sizes to the standard of 175g, click here, but remember that as long as your overall sugar intake is reasonable, this doesn’t matter that much, so don’t sweat it!

What about sugar substitutes?

This is the other option for lower-sugar flavoured yogurt. Examples include Yoplait’s Source, sweetened with sucralose/Splenda, and Danone’s Activia Fat Free, sweetened with stevia extract. Their sugar content is similar to the reduced-sugar options, but they’ll taste sweeter.

Is that a healthy choice? This is a controversial can of worms. Suffice to say these sweeteners are probably safe in moderation but some studies have suggested an association between high use and poorer heart health. While population studies like that can’t demonstrate cause and effect, and there are probably other contributors to those findings, it certainly doesn’t make a compelling case for them, does it?

Skyr is Icelandic yogurt, similar to Greek yogurt: thicker and high in protein. I find that Skyr fans LOVE it. They’re very enthusiastic. But again, not everyone does. Definitely worth a try though. 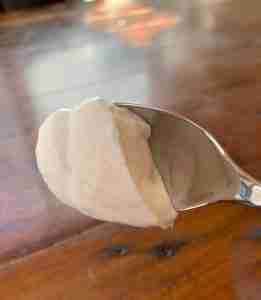 Every flavoured Skyr product I looked at was lower in sugar than regular yogurt: about 2 teaspoons added per 3/4 cup serving, instead of 3. That includes the Liberte brand, which boasts about being 45% reduced sugar, as well as the Siggi’s and Shepherd Gourmet brands, which don’t, but are almost as low.

Note that the Presidents Choice flavoured Skyr yogurts have about the same sugar content and are sweetened with stevia, so they taste sweeter, and if you’re like me and don’t like the taste of stevia, you might prefer other brands.

This is another controversial one! One of my favourite review articles says “The cardiometabolic effects of different dairy foods represent a major unanswered question of modern nutrition science.” He suggests we look at the whole food, not just the fat content, and that yogurt is generally found to be cardioprotective, regardless of fat content.

Others have argued that dairy fat in particular, and saturated fat in general, is not as harmful as traditionally believed. The American Heart Association, however, holds firm in it’s guidance to shift away from saturated to unsaturated fats, including dairy fat (here and here).

Part of the problem is that much of the research lumps all of the saturated fats together, and as a group, they tend to raise cholesterol levels. But there are different saturated fats, and we’re learning more every year about their unique effects on our health.

The other problem is the nature of nutrition research, much of which comes from population studies, which give us clues, but can’t prove cause and effect. It’s complicated!

My suggestion with these controversies is to have the food in moderation if you like it, not if you don’t. And then don’t worry about it. In the grand scheme of things, it’s unlikely to make a significant difference. If it did, the research would probably show it more clearly.

So choose the fat level that you like. If you like non-fat or low-fat yogurt, fine. Nothing wrong with them. If you prefer the higher fat ones, also fine, especially if it helps you skip the sugar.

Should you look for probiotics?

These days, all yogurts, at least in Canada, contain live bacterial cultures. However, not all of those live cultures are “probiotics”. Probiotics are defined as “live microorganisms which, when administered in adequate amounts, confer a health benefit on the host”. Confused yet?

It just means that to use the term “probiotic” on the label, at least in Canada, there has to be some research demonstrating a health benefit associated with strain of bacteria, and it needs to be spelled out on the package. Probably the best known in Canada is Danone’s Activia, for example, which contains Bifidobacterium lactis bacteria, “a probiotic that contributes to healthy intestinal flora”.

Do the microorganisms found in other yogurts contribute to a healthy gut flora? Probably. But this particular one has been researched. That’s all. I don’t get too excited about it.

My kids like yogurt drinks, so I was curious to see if they’d be higher in sugar. Turns out that when you adjust for serving size, they aren’t. And the average for the flavoured kefirs I checked is the same.

Kefir isn’t yogurt. It’s (usually) a fermented milk product though, and they sell it near the yogurt, so I’m including it. It has different (and more) live active cultures, including yeast, which appears to be a good thing. So mix it up! 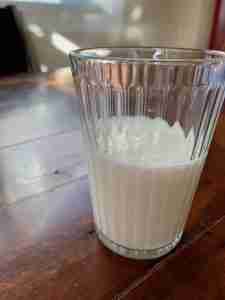 Plain kefir is thick and sour. If you’re expecting milk or yogurt, you won’t like it. I think of it as a lemon smoothie. An acquired taste indeed, but I quite like it now!

Fruit on the bottom?

If you like the fruit on the bottom yogurts, go for it, but don’t be fooled: There’s very little fruit in there. How can you tell? Just check the label for fibre, vitamin A, and vitamin C. If there’s fruit, there will be a little of those.

For example, the Presidents Choice Strawberry Fruit On The Bottom 0% M.F. Greek Yogurt has zero fibre, vitamin A, or vitamin C. If it contained just 2 tablespoons of strawberry, the vitamin C would be about 18%.

If you want fruit with your yogurt, just add it yourself. 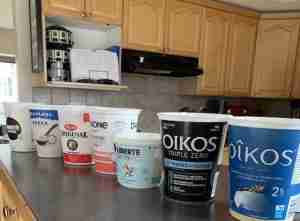 This is the most important consideration! I purchased no less than 12 different yogurts with the intention of including some taste-testing results here, but then decided against it. Taste is so personal! 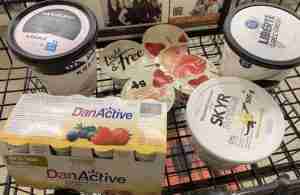 One of the products I liked best was a low-fat vanilla, and when I mentioned that on Instagram, someone commented, “Really? Even with the no fat? I often find the low fat creek to have a chalky/ almost dry texture.” I didn’t notice that at all.

The posts I did about this yogurt odyssey were among the most commented on posts I’ve done in a long time. Everybody has an opinion about yogurt!

So perhaps the taste-testing is best left up to you. Just remember, if you switch to a lower-sugar option, it may take a few tries to get used to it.

As for me, I’m sticking with plain Greek. Not to be boring — I just really prefer the taste of the fruit, nuts, honey, maple syrup, or whatever else I mix in, versus the taste of commercially flavoured yogurts.

How about you? What’s your favourite? Chime in on Facebook. And let me know, would you like a non-dairy and/or lactose-free yogurt review?

As always, all references to a specific products here are just meant to help you! I have no relationship with any of these companies and never write sponsored blog posts.