Did you see the eye-popping, eye-rolling, eye-give-up nutrition news last week? “No amount of alcohol is good for your overall health, global study says” and “Coconut oil is ‘pure poison’, says Harvard professor“.

I started a list of reasons why we hear such conflicting nutrition news, and before I knew it, I had 25 of them, and a headache. And I’ve probably missed some. If you get overwhelmed like I did, skip to the end for some reassuring tips about how to make sense of it all.

So what’s a person seeking better health to do?

Despite these weaknesses, nutrition science is better than no science. A few tips that can help keep you sane:

And what do I make of that alcohol study? Despite the headlines, the findings aren’t all that different from our previous knowledge. One or two drinks a day are associated with less heart disease but an increased risk of other problems, from cancer to car accidents. The more you drink, the more health problems you risk, and any benefit disappears.

Previous studies have suggested that it nets out to a slight overall benefit at low levels of consumption. With this study, however, researchers found a tiny increase in overall risk with a drink a day. How much? 918 of every 100,000 one-drink-a-dayers will develop a related health condition in a given year, compared to 914 non-drinkers. (This from André Picard’s analysis in The Globe and Mail, where you can find more insightful context.)

(Important caveat: The standard drink used in this research is smaller than what we call a standard drink in Canada: ~100ml (3.5 oz) of wine, ~240ml (8 oz) of beer — about 3/4 of a can or bottle — or a one-ounce shot of hard liquor. That’s tiny compared to what you’re likely to be served at the pub, so your one-drink-a-day habit may actually be two a day, in the language of this study.) 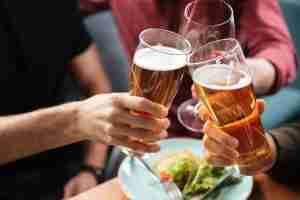 Just FYI, these are about two “standard drinks” each, according to the latest study, not one.

And what kind of risk does that second drink bring? Now they estimate 977 of 100,000 people are predicted to experience alcohol-related health problems. And it goes up from there.

Guidelines, however, don’t change nearly as fast as headlines. (Note – link updated to the guidelines released in January 2023.) They’ve always been prudent, cautioning against using health benefits as a reason to drink, because the downsides of drinking more than just a little outweigh any benefits, no matter which study you consult.

And coconut oil? I’ve covered that before, and probably will again. It’s not a miracle superfood, but certainly doesn’t meet the definition of “pure poison”. But you probably knew that, right?

Your thoughts are welcome, as always. Join the conversation on Facebook.